Film Costumes at FIDM – Academy Award Nominated Films and the 2019 Season
Taking an ART & CULTURE tour of Downtown LA? This is a great stop for everyone in the whole family.
The first time I saw a costume exhibit was in England at an ancient castle on a tour (I was still in high school). The costumes for a Henry VIII television series that had been shown on PBS were displayed and it literally changed my life. I decided I had found my passion for fashion and history; I decided to pursue a career in costume making and design that led me on a unique journey. People often ask me – what sort of job is this?
What does a Costume Designer Do?
People often forget that there is a costume designer who partners with an actor on the journey of creation when creating a story on film that is guided by a director who acts as the leader of the band. The ‘wizards of wardrobe’ bring bring the look and feel of a world with a number of unique skills to the process: painting, crafts, plastic injection molding or metalwork, sculpture and all forms of decoration with sewing and pattern. making (much like fashion) living at the heart of it. The knowledge of story, character and history is also an intrinsic part of making costumes; all contributing to a process of ‘willing a character into existence’.  A whole group of talented artists go along on the journey to add to the Costume designer’s vision that is an interpretation of the director’s take on the story to be told. Other artists join in such as hair, make-up and a production designer for the environments that make project a collaborative effort that is ideally the sum of its parts. The art of the media itself (film, television, stage) can change some processes, but telling a story with a character is always the same.

The Exhibit Experience: A Classic Museum with a dash of Multi-Media

Once inside the museum…you will take a path along the way through the many films of 2018 including those that were nominated and the winner of the Oscar for Best Costume Design Ruth Carter (Black Panther) herself a veteran of the industry. 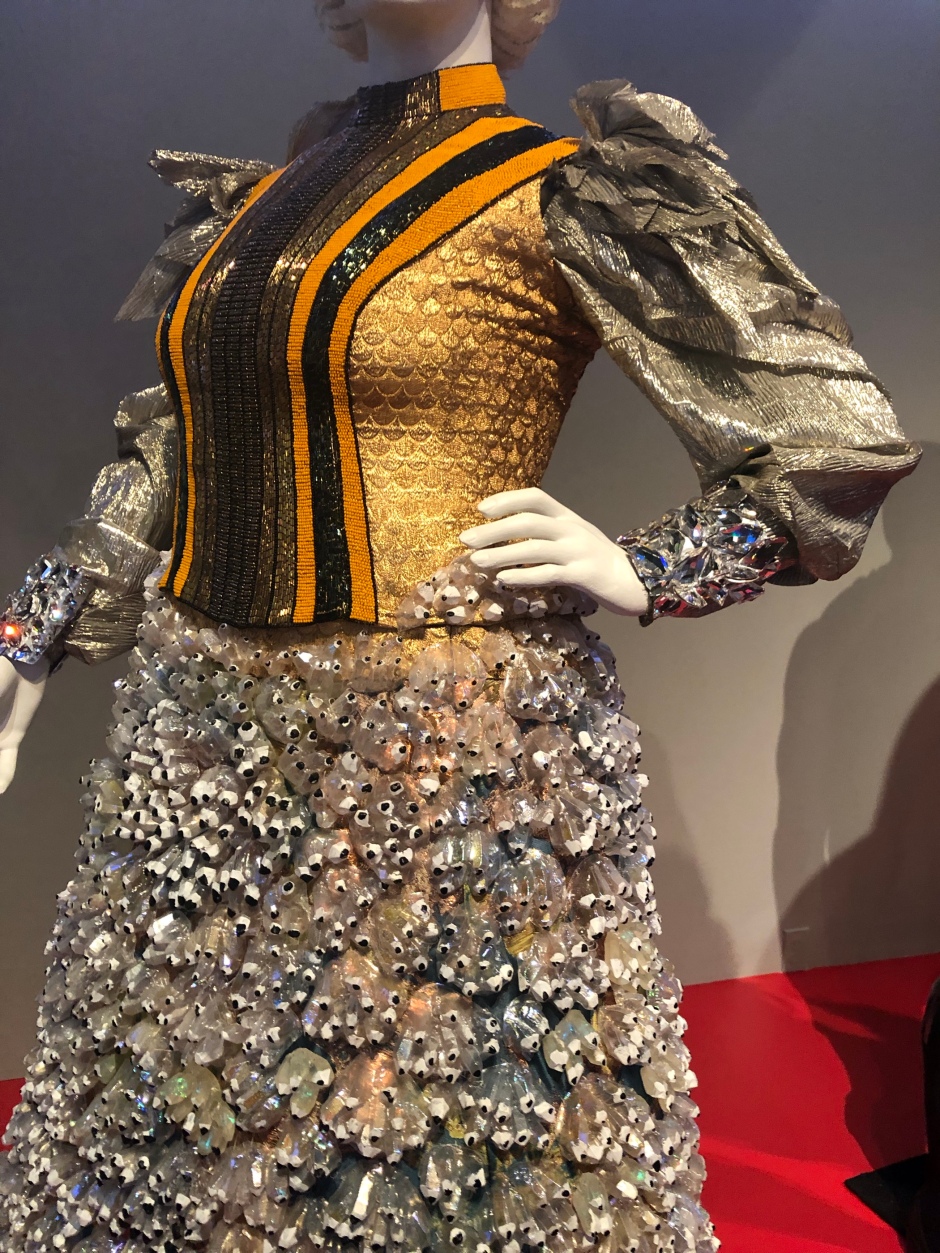 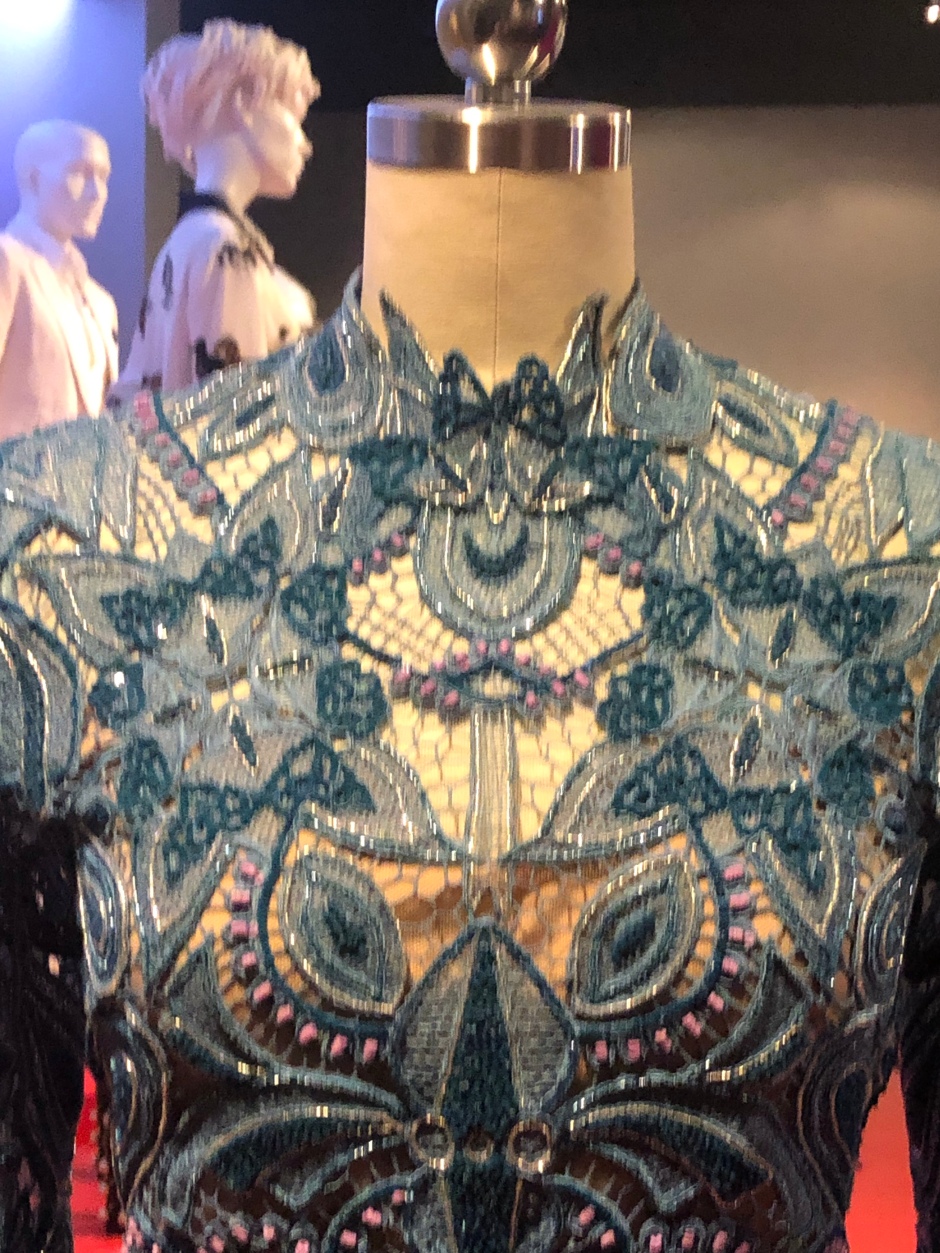 Media is on display throughout the gallery space with interviews and backstage video of how the clothes are made and the people behind them. Interviews with costume designers, producers and actors share in the story.
Costumes in Films are Unique to Their Time: They are both a link to the Present and the Past.
Costumes in film often are inspired by fashion runways and are seen through the looking glass of the epochs they inspire reflected back to our own time. One interesting aspect of the show was just how many late 1930s and 1940s looks inspired the modern fashion whereas the period clothes had a very modern and edgy spirit that made the period seem even more fresh and modern. Surprises like the AQUA MAN outfit up close (he is really tall!) or the magic of the NUTCRACKER (Trim Heaven) or MARY POPPIN’S travel ensemble (for her flying entrance) tailored to perfection really brings the viewer into the artistry and skill of this unique art form. The outfits for the FANTASTIC BEASTS could have easily marched down the Thierry Mugler runway (super fashionable) making it hard to pick a FAVORITE which by the way was one of the most modern takes I had seen of this period (The Restoration of England) that in other hands tend to make actors look like “moving pieces of furniture” in their heavy brocades and starched collars. I had a difficult time picking my favorite set of costumes; I am sure if you put the kids in the car and take them over to see their favorite films up close, it will be a great experience for everyone.

What a year for the Period Costume…and even the Modern ones which require their own special kind of art as well.

Editor’s Note:
This should be on your list of things-to-do after a nice lunch at one of the many restaurants in the area and easy parking for just $5.00 in the building also makes it convenient. Our thanks to Costume Designer & Creative Director, Jacqueline St. Anne for the invitation to the show. For more information on FIDM and the museum please see their website at: www.fidm.edu

iThere are no comments

London and the upcoming King Charles Coronation is a perfect excuse to visit this amazing city. Bars, Hotels, and restaurants are in our list. @tablethotels @plumguide
Join 606 other subscribers

Feel Free to Translate Us!

ARTIFICE is a film, television and commercial stylist with a background in arts and culture and film/media. In addition, her independent agency develops writing projects, blogs and bring together luxury brands with charity fundraising. Recently merged with Kaleidoskope Media (kaleidoskopetravel.com) a travel media platform. The platform aims to raise awareness and fundraise while curating travel experiences around the world with sustainable travel Tips + Hacks.

Begin typing your search above and press return to search. Press Esc to cancel.